The Windows 7 free security update window closed to consumers in January of 2020. However, due to the overwhelming popularity of the OS, Microsoft began offering Extended Security Updates (ESU) for the Operating System. The first update preparing a Windows 7 system for this next phase of patches is KB4528069. This post dissects the KB4528069 update to understand how ESUs differ from standard Windows 7 updates.

Important: You must obtain an ESU license to apply ESU updates. Details on obtaining an ESU license can be found here. This research was completed for security vulnerability research purposes only following the Microsoft Legal Safe Harbor Terms. Do not try to reproduce without having the required licenses. 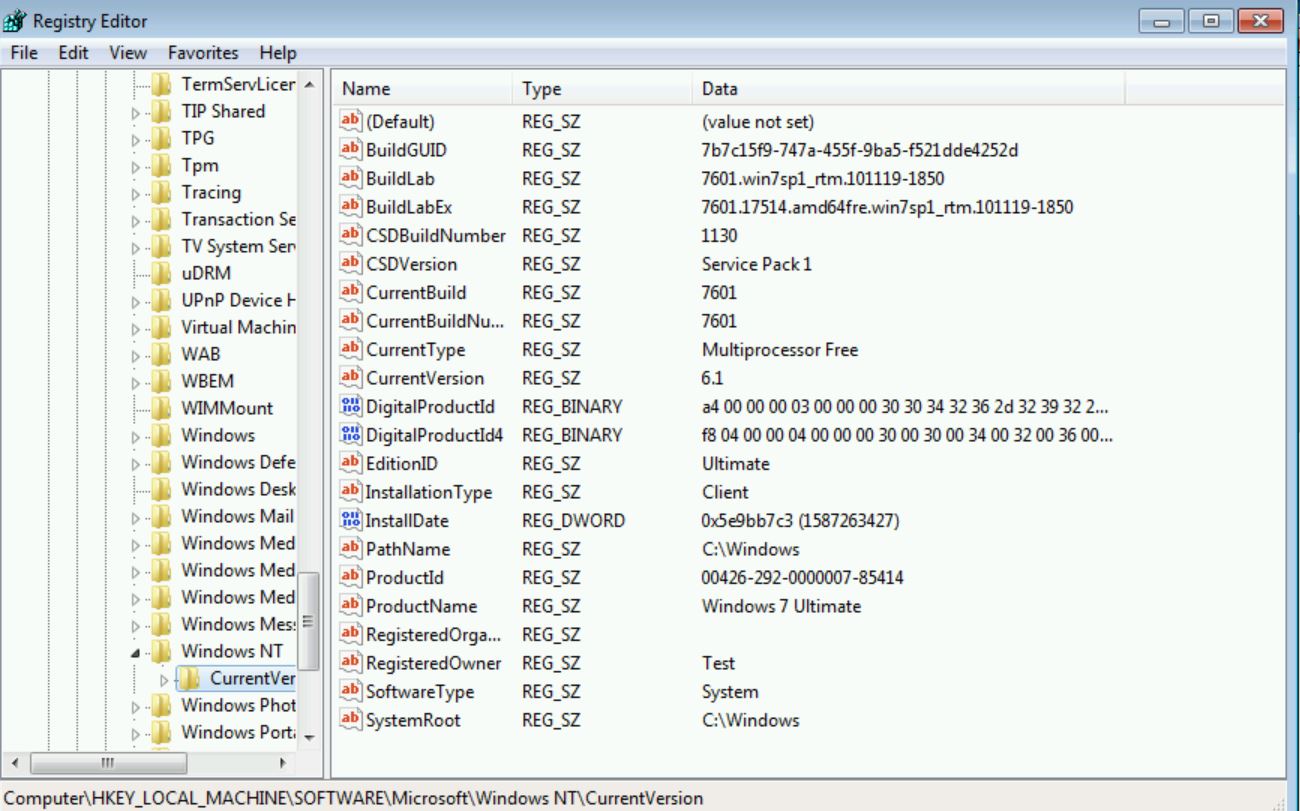 Next, I started checking for updates. This resulted in 182 updates on the first scan. 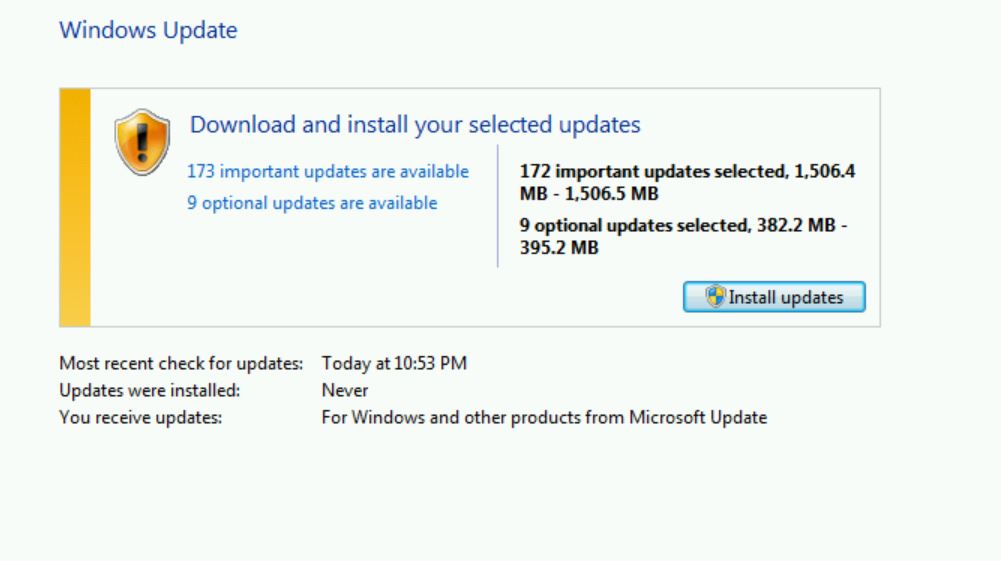 After many update cycles and reboots, 10 years of updates have been applied. 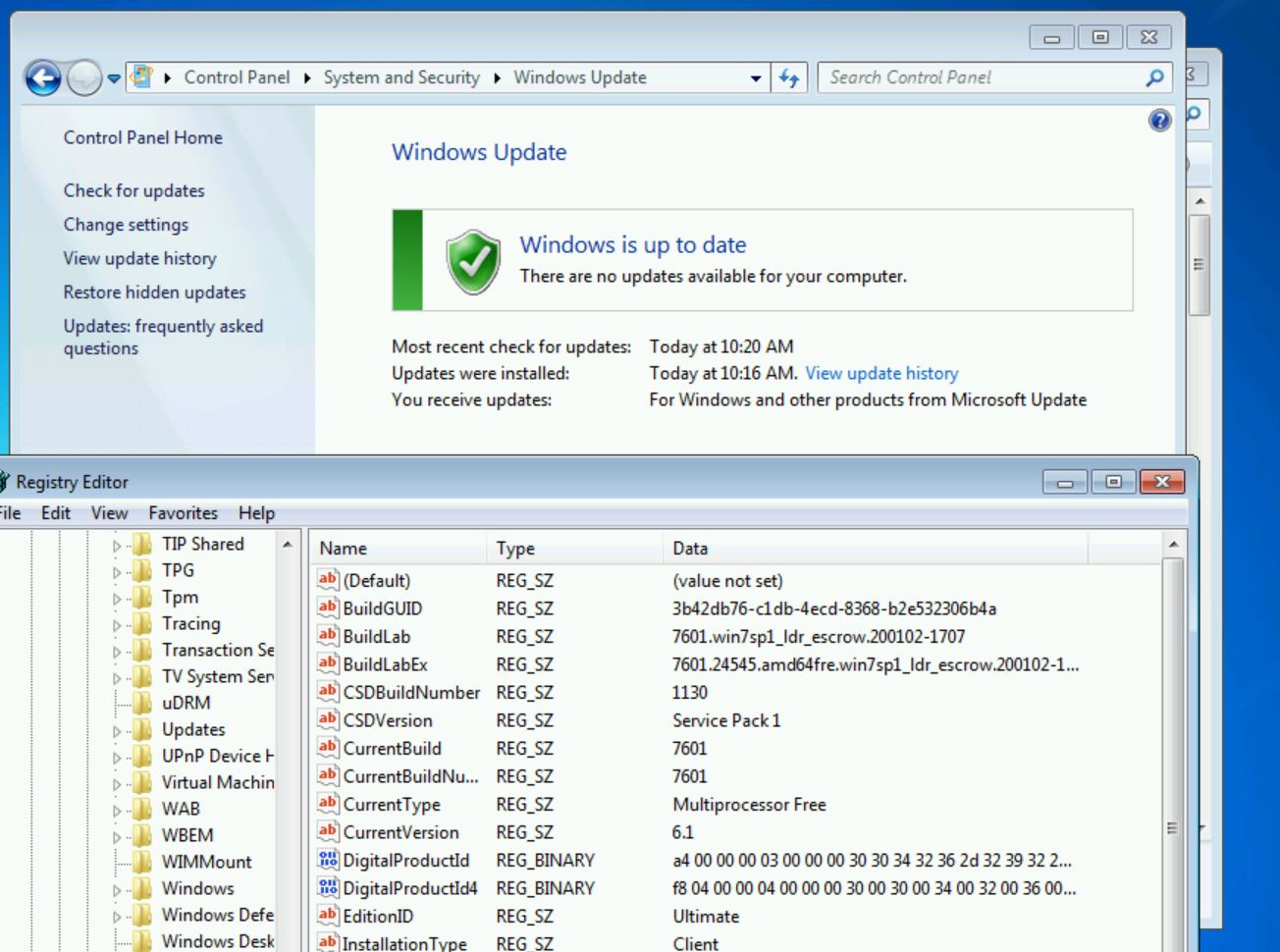 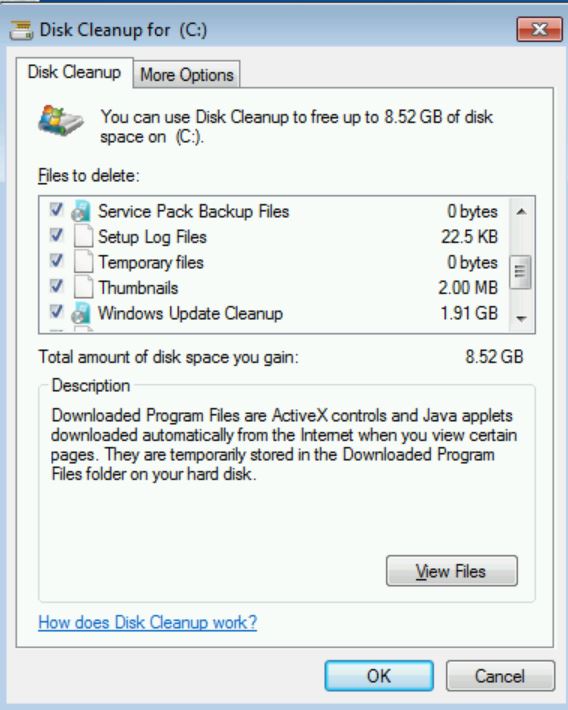 Next, I downloaded and tried to install KB4528069 (Verify Computer Is Ready To Receive Extended Updates). But this fails. 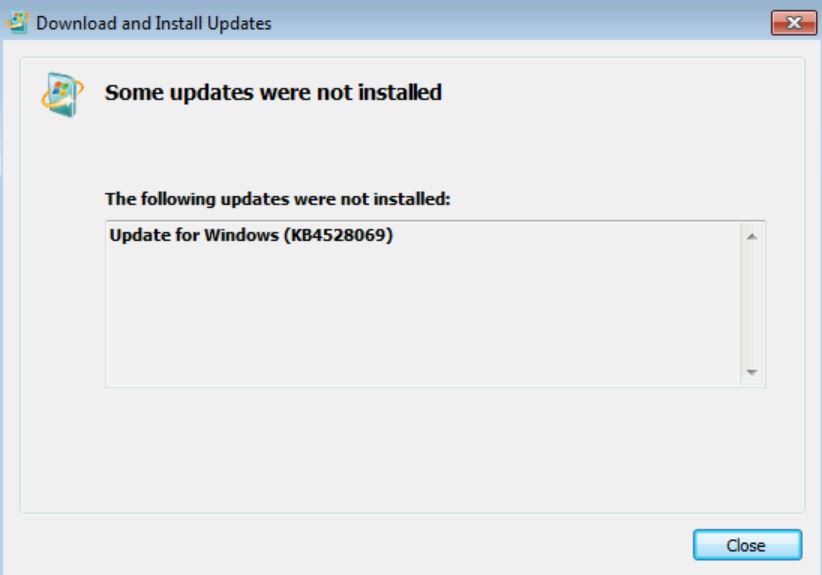 So, I reverted the VM, started up ProcMon, and traced the installation of this update.

The first thing that I discovered within the trace was a manifest file that was being created, specifically:

The content of this file shows that it is an important file to keep on the system. 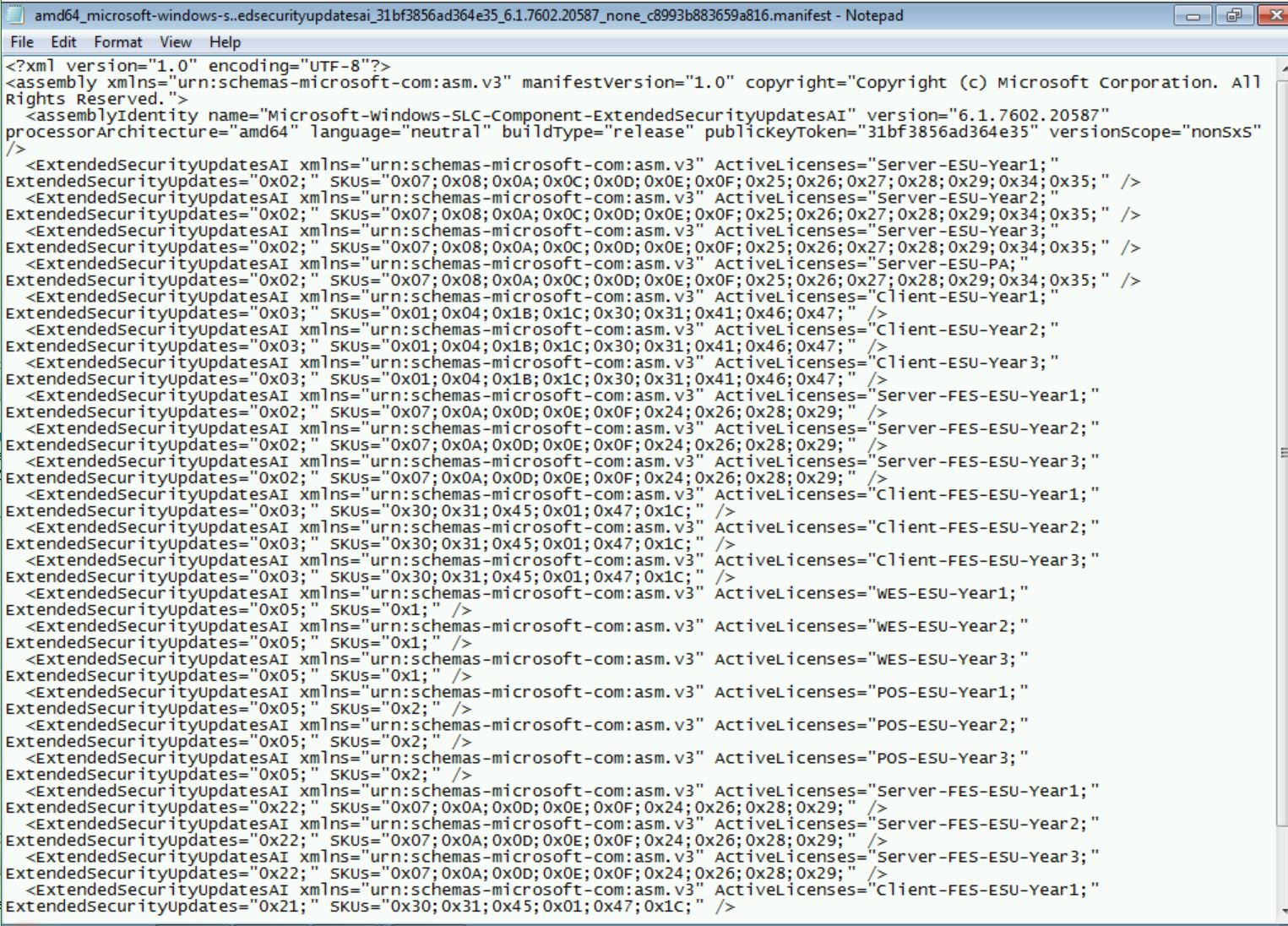 A final note on this file. If you re-examine the ProcMon capture, this file is added but NOT DELETED when the update failed. This will be important later.

The next thing that I noticed was a couple of registry keys being created, specifically:

The COMPONENTS registry hive is hidden by default, so I manually mounted it to view the referenced registry key. 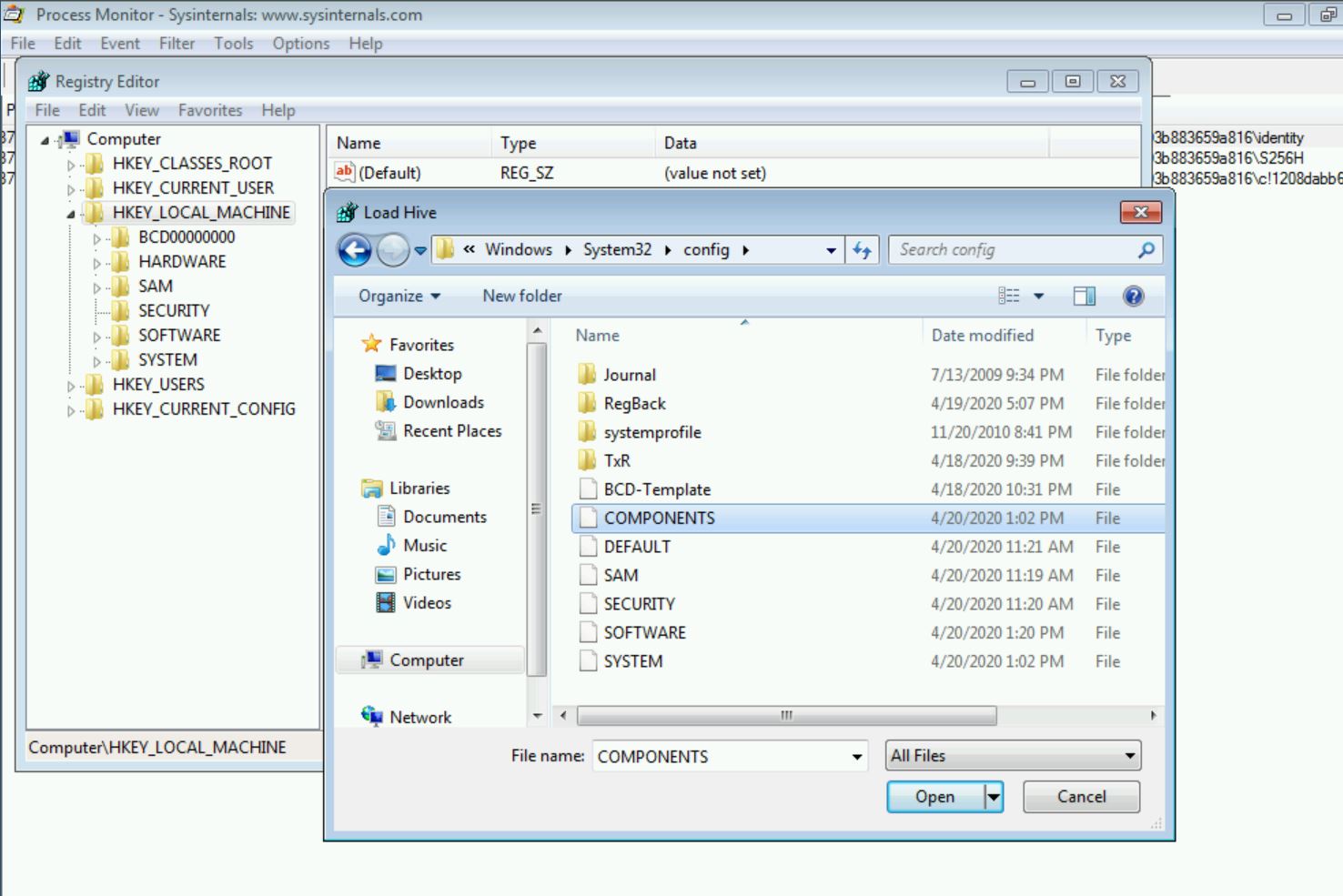 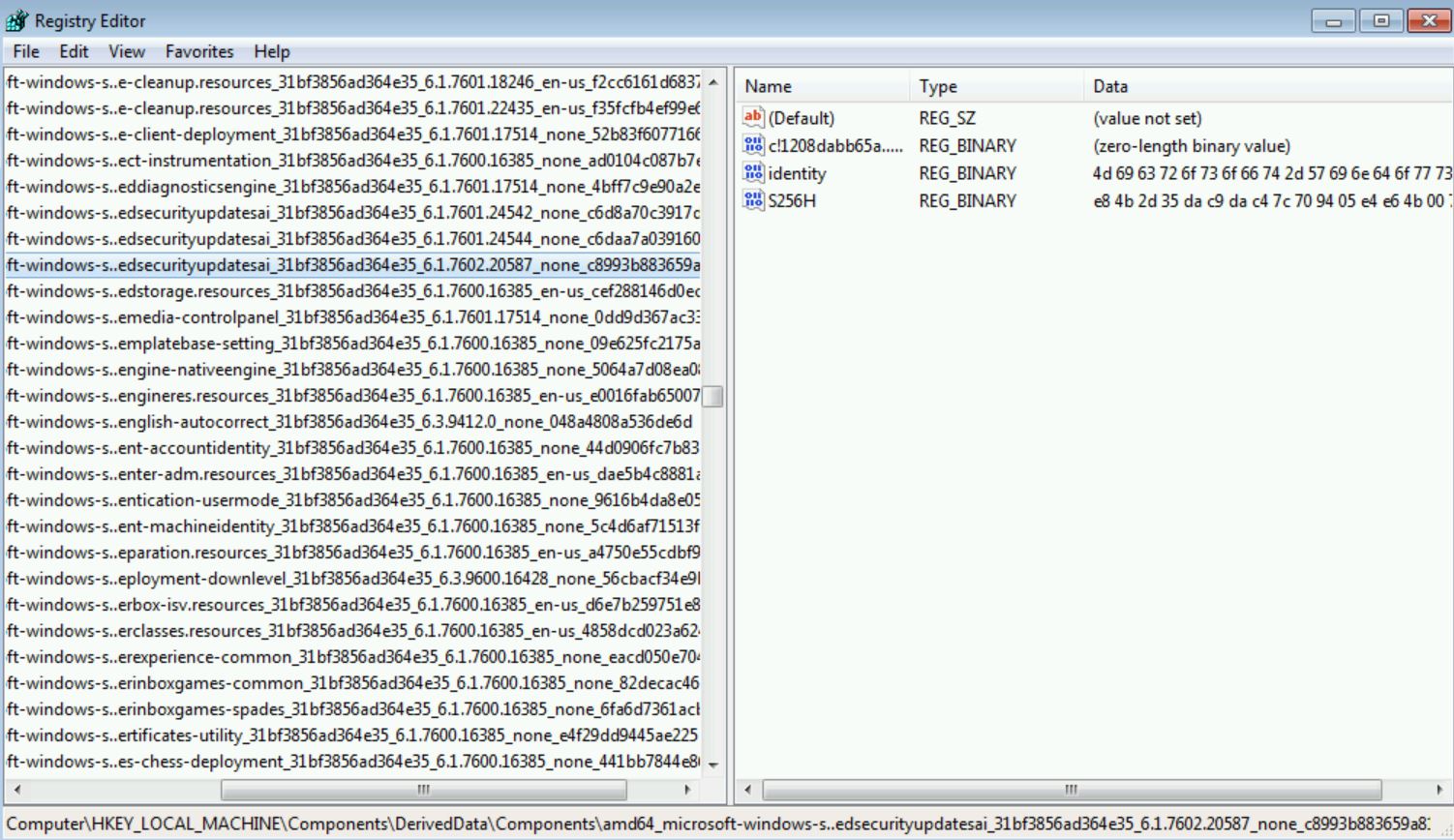 This will also be important later.

Finally, the last important activity I noticed was the modification of registry keys in the Local Machine registry hive. Specifically:

Checking the registry again after the failed update, there is something different about this registry entry. It is missing. 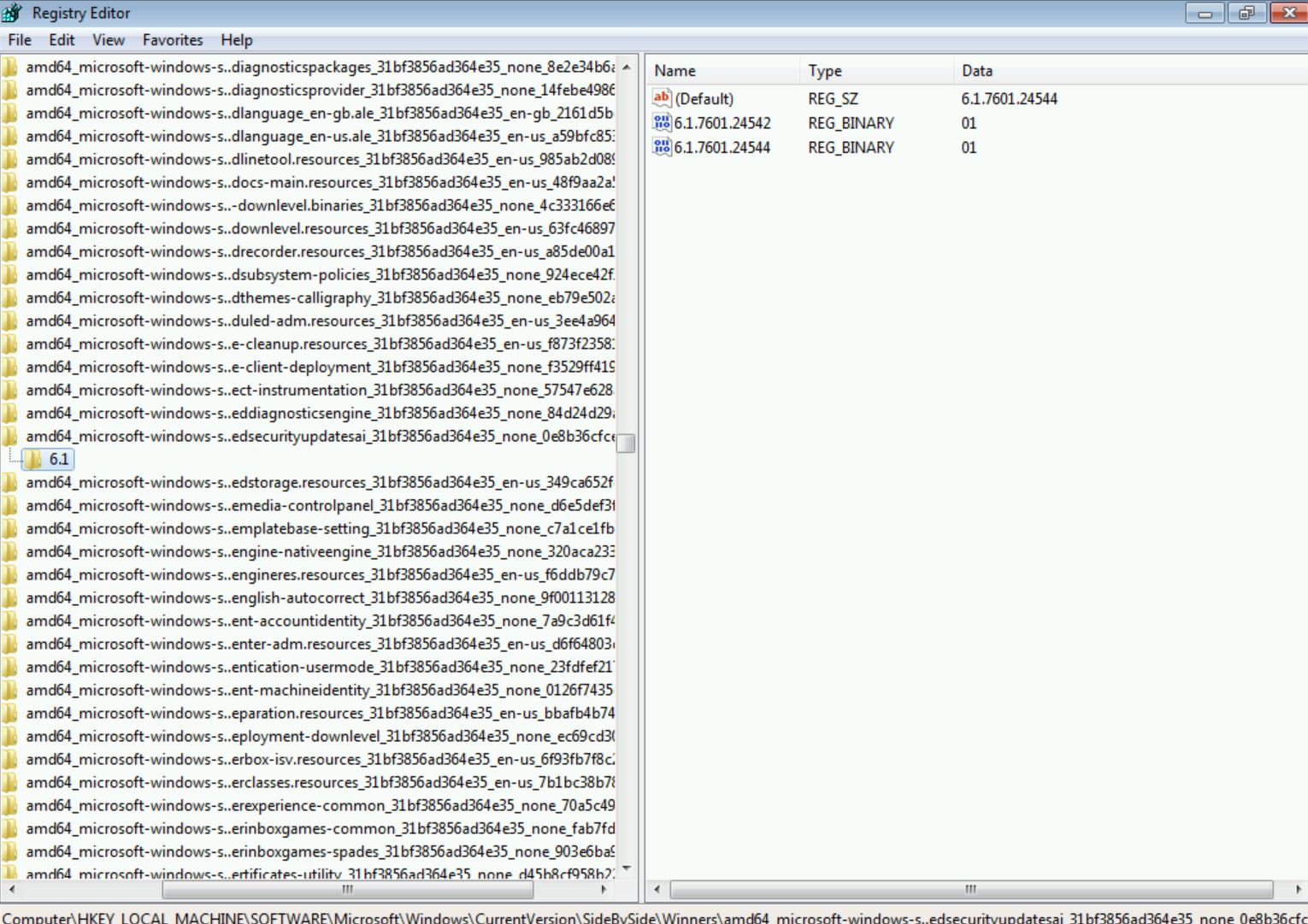 Re-examining the ProcMon trace, we see that this key is created, and then deleted as part of the failed update.

The other key that is being set during the patch installation is the Default @ value, which temporarily switches to the new build number and then reverts to the old value.

So now that we know the SideBySide registry key switch gets reverted, I manually switch it back to the value KB4528069 is trying to set it to. 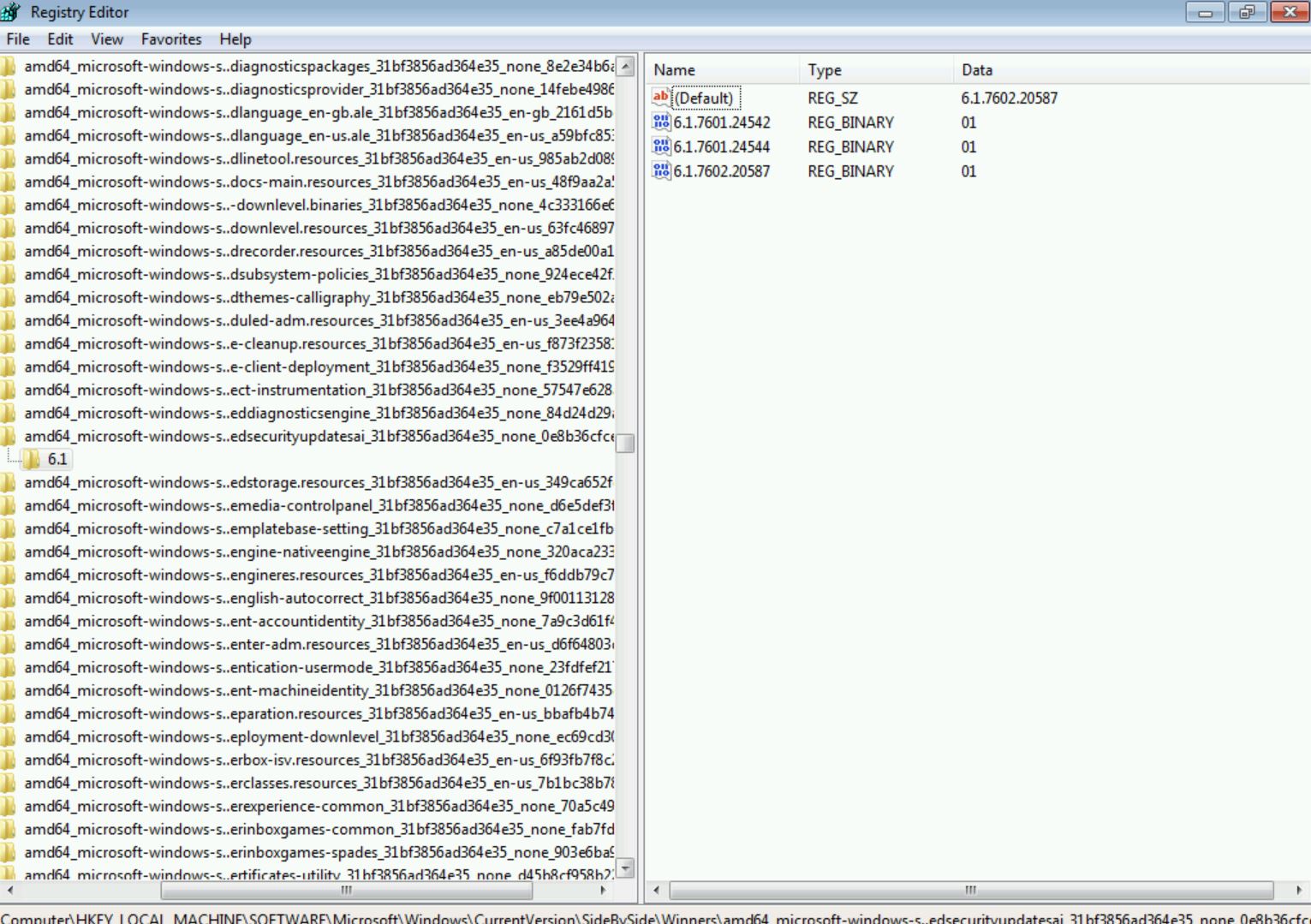 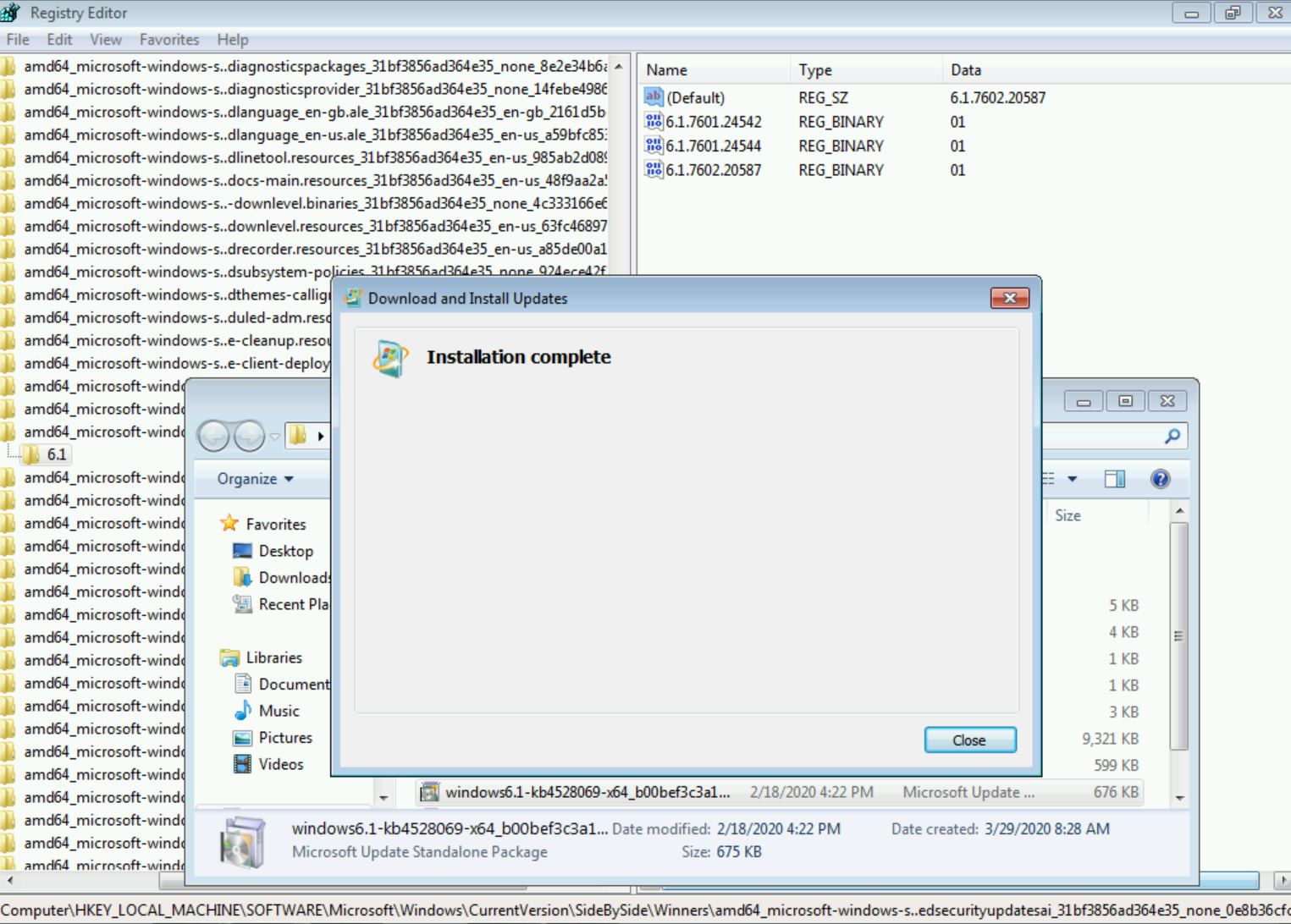 Bringing Windows 7 Up To Date

It is one thing to install a silly update that verifies eligibility. It is another to get additional updates to install. First, I grab the latest SSU from April and try to install it. 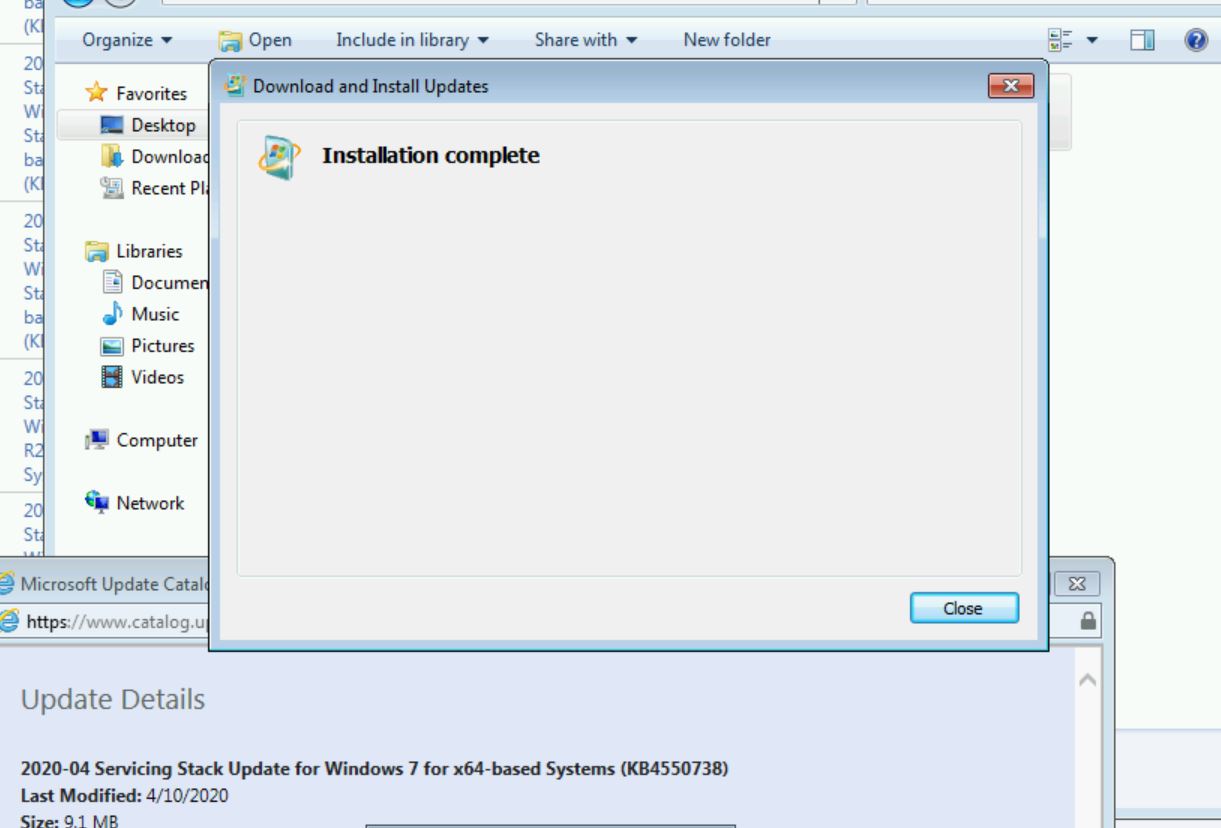 This installs successfully. Next, I try to install the latest cumulative update from April. 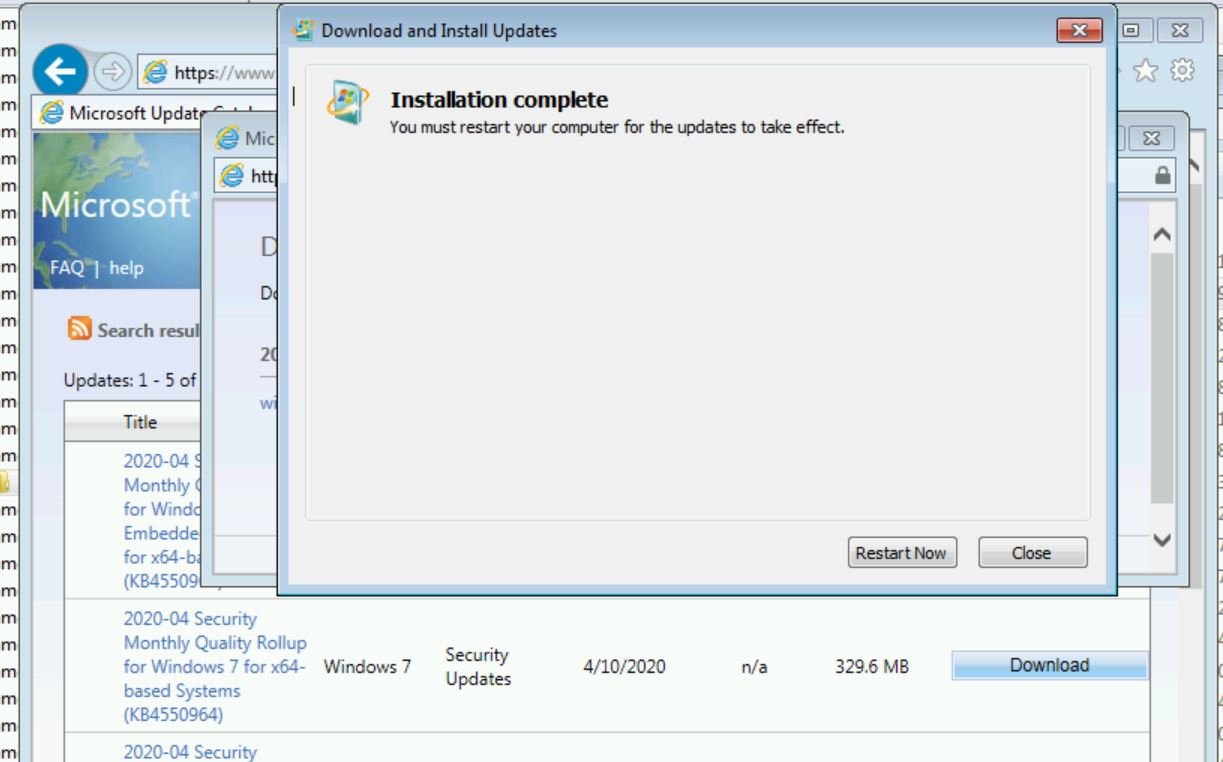 This appears to install successfully. However, we will not know if it works until after the reboot. From Microsoft’s Known Issues section in the February Cumulative Update:

After installing this update and restarting your device, you might receive the error, “Failure to configure Windows updates. Reverting Changes. Do not turn off your computer,” and the update might show as Failed in Update History.

This is a sign that there are issues with the current ESU configuration. However, when we reboot, there are no errors, and the OS build date has successfully increased to March 30th, 2020 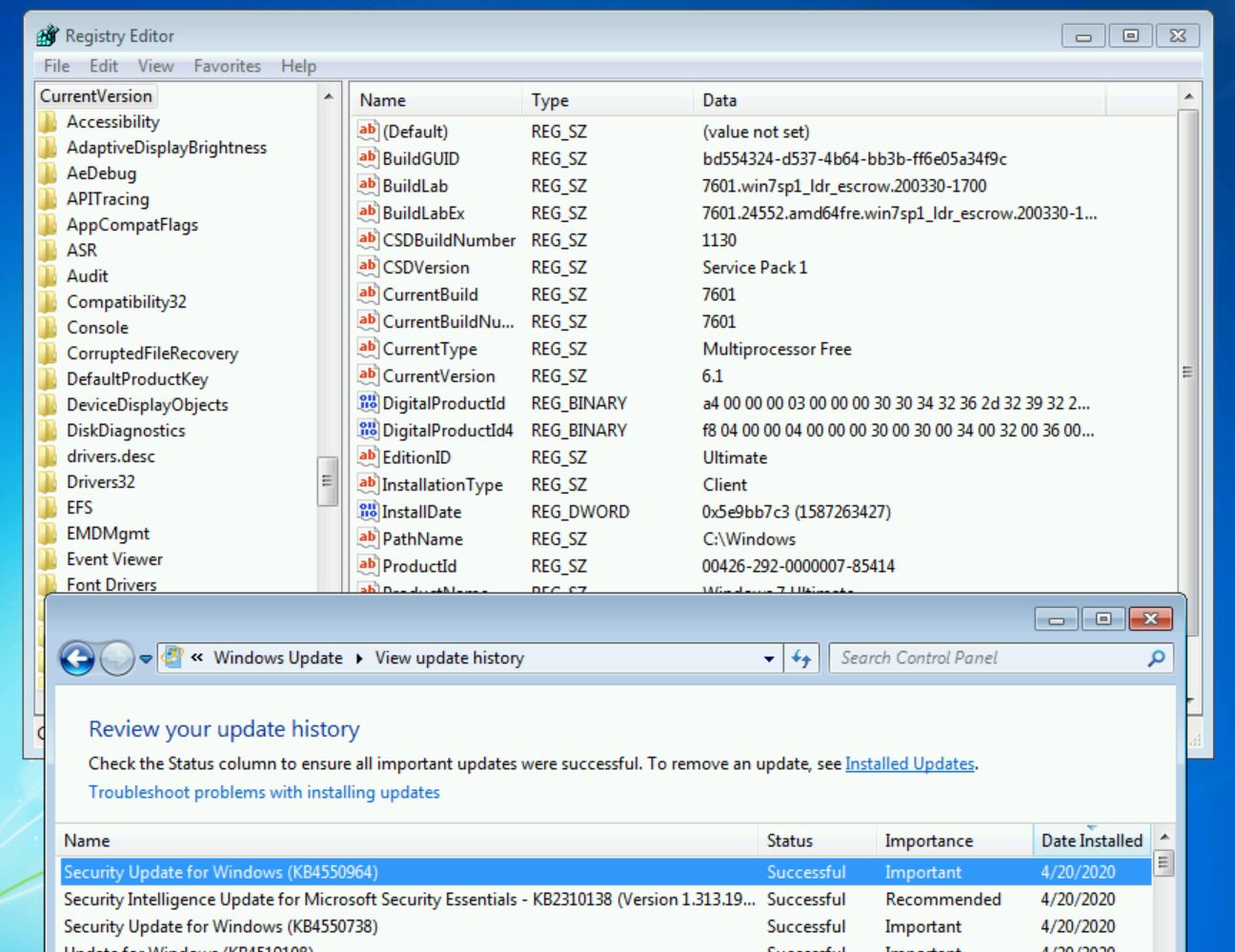 What I learned from dissecting this update was that there are 3 important parts to the installation of KB4528069: The manifest file, the Components registry keys, and the SideBySide registry keys. However, 2 of the 3 required parts do not revert upon a failed update. Therefore, to get the update to install properly:

After this, the latest servicing stack update and the latest cumulative update can be installed without issue.

Note: Windows Update will not detect available updates unless a valid key has been activated, regardless if the latest servicing stack and cumulative updates have been installed.

The September 2020 Cumulative update breaks this technique and it does not install successfully. For an updated workaround, see this post: Windows 7 ESU Analysis Updates

Support for 32-Bit operating systems has been verified. Links to relevant registry settings and the manifest file have been added.

The various files and registry keys used as part of this analysis have been uploaded to GitHub here. See below for specific files and links referenced.

buy me a coffee